In order of importance, the three priorities of the Minnesota State High School Clay Target League are safety, fun and marksmanship. All participants and spectators are required to adhere to all Championship rules and requirements included in the MSHSCTL’s 2014 Policies & Procedures guidebook. Any participant or attendee who does not adhere to these rules will be disqualified and/or asked to leave the Championship. The Championship committee reserves the right to make alterations in, or amendments to these rules at any time without notice.

For 2014, the Minnesota State High School Clay Target League added Classes that contain multiple conferences which keeps teams of similar size together and provides an easier scheduling format for the Championship.

Benefits of this new Class format include:

Single-day competition – coaches, athletes, and family spectators will only be required to spend the day at the tournament.
Reduce costs – no accommodations are necessary for coaching staff for the weekend and teams can easily carpool for travel.
Earlier registration – participant registration will start earlier due to assigned tournament days.
Fair Class competition – teams will compete only against similarly sized teams in their respective Class.
No classification changes – Class competition will still include Novice, Junior Varsity, and Varsity classifications.
Accommodate more athletes – expected over five days.
Easier team and family planning – teams  know what Championship day they are scheduled on in March.

All athletes must register for participation in the Championship through their team. No deadline extensions will be allowed.
May 1-15: Athlete registration.
May 22: Non-refundable payment of $25 per athlete due.
May 27: Coaches re-assign athletes to different classifications to create teams with minimum of five in the classification (optional).

Coaches will login to their Team Management System and select “Championship Registration” to select the participating athletes and designate their classification. No members can be added or changed after a team has submitted their roster. Please make sure all the information is correct prior to submission. You should print a copy of your  Championship roster after your submission.

Spectators are welcomed to attend the Championship. Team setups including tents and chairs are allowed BEHIND the field sidewalk. Vehicles are temporary allowed to drive to the spectator area prior to competition to unload gear. Coolers for food and non-alcholholic beverages are allowed. Grills are not allowed near the trap fields. The area in front of the spectator sidewalk must remain clear at all times for Championship officials and maintenance vehicles. There is no cost for spectators and parking is free.

Shooters using semi-auto shotguns are required to use shell catchers for the Championship and State Tournament. It is also noted as a requirement in the MSHSCTL 2014 Policies & Procedures. Ejecting spent shells towards neighboring shooters  is a distraction for them.  A limited supply of shell catchers are available for purchase in the clubhouse.

Suspension of competition due to hazardous weather conditions.

In the event of inclement weather before or during the Championship, the MSHSCTL will make safety their first priority. When lightening is observed or thunder is heard, the tournament must be suspended. The occurrence of lightning or thunder is not subject to interpretation or discussion. Lightning is lightning; thunder is thunder.

Everyone will be asked to take shelter either inside of a building, shelter or vehicle. If, after lightning is seen, and it does not reoccur for 30 minutes, the tournament committee will review weather reports and the committee will decide if/or when the competition will resume.

If severe weather is forecasted, and time permits, all participants will shoot a lesser number of targets as determined by the tournament committee. If time permits, all participants will shoot more targets until the prescribed number of targets has been shot. If weather does not permit completion of the shooting, the team with the highest score of the round(s) every shooter was able to complete, will be deemed the winner of that competition.

If a competition cannot be held due to severe/inclement weather, the competition will be cancelled. Since the Championship is the qualifying team tournament for the Minnesota State High School League’s State Tournament, Conference champions will automatically qualify for the State Tournament.

All athletes will participate in the “High Gun” (highest number of targets hit) competitions in their corresponding classification. If a tiebreaker is required for any places, the longest run of hit targets by the athletes will be used. The longest run score will start from the last target and count backwards until a missed target is reached to determine the tiebreaker score. If there is a tie after the longest run is totaled, then a tie for first place is declared.

Coaches are required to check-in at the registration tables located in the clubhouse. They will receive athlete t-shirts and backpacks for their entire team.

Specific time and field assignments for teams are posted on the website and throughout the Alexandria Shooting Park during the Championship. Athletes will only be able to shoot during their team’s scheduled time on their team’s designated field(s). It is possible that final remaining members of team may be combined with another partial team to create a full squad of participants to maximize time allotment.

Coaches may squad their teams as desired. The only requirement is that Novice shooters must be squadded together since they are the only classification that shoots 75 targets. Junior Varsity and Varsity shooters may be squadded together. Coaches will be provided pre-printed name labels at check-in to affix to the scoring sheets as they squad their team.

Range Safety Officers (RSO) are responsible to coordinating teams to shoot at their scheduled time and field. They are also responsible for following all policies and procedures in addition to ensuring the safety of everyone. RSO’s are identified blaze orange shirts or vests. Everyone is expected to comply to all instructions of the RSO’s.

Add a label to your shotgun.

Add a label that includes your name, school team and contact information on your firearm. With many participants and possible similar shotguns, there is always a chance for a mistaken shotgun.

Official scorers are provided by Alexandria Shooting Park. Scores are recorded on a scoring sheet and tallied in the clubhouse. Scores will be posted on clubhouse monitors, on the clubhouse printed scoreboard in the main hallway and on the results website page.

The only time a score may be disputed is on the trap field after a scorer has announced the round scores. Scores can be verified in the clubhouse, but not changed unless there is a published scoring error.

24 teams will qualify for the Minnesota State High School League’s State Tournament on June 14th at the Minneapolis Gun Club in Prior Lake, Minnesota.  The top five combined scores from the Varsity and Junior Varsity competition will be used to determine the top qualifying teams. The number of top finishing teams qualify for the MSHSL State Tournament from each day of the Championship is determined by the number of conferences in each Class that are designated for each day of the Championship:
Class A – Friday June 6: 9 teams
Class AA – Saturday June 7: 5 teams
Class AAA – Sunday June 8: 4 teams
Class AAAA – Monday, June 9: 3 teams
Class AAAAA – Tuesday, June 10: 3 teams
Individuals competitors for the MSHSL State Tournament are determined by the top 100 student athletes in the Minnesota State High School Clay Target Leagues’s by overall season average. Read more about the MSHSL’s State Tournament.

No alcohol or tobacco use allowed.

Please refrain from the use of alcohol or tobacco during competition near the trap fields or spectator areas.

Coaches should bring emergency contact information for all their athletes for reference if needed. 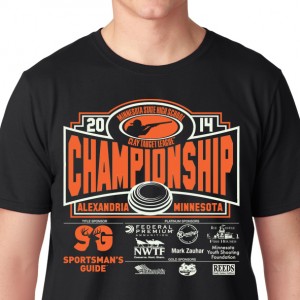 Ample on-site free parking is available to all participants.

Check the MN DOT’s website for current construction projects that may affect your travel.

To coaches, assistants, schools and parents for everything you do to provide your student athletes this unique opportunity to participate in the largest youth shooting sport event in the WORLD!

All rules are subject to change prior to the Championship without notice.