The mission of USA Clay Target League, and its affiliates (collectively, the “League”) is to emphasize the positive influence shooting sports can have on athletes and their families. The League does this by providing a safe, comfortable, and positive environment focused on safety, sportsmanship, teamwork, and fun.

One aspect of creating a safe environment for athletes, coaches, and team staff members alike includes ensuring misconduct, including any physical and sexual abuse, is identified, addressed, and eliminated. Following the creation of the federal Safe Sport Authorization Act, the Center for SafeSport has identified six types of misconduct: emotional misconduct, physical misconduct, sexual misconduct, bullying, harassment and hazing. All forms of misconduct are intolerable and in direct conflict with the mission and goals of the League.

The League is committed to the safety and protection of all participating athletes, as well as the coaches and team staff members.

The League publishes this policy as a tool to help ensure a safe, comfortable, and positive environment for those participating in the League’s activities. This policy is to be followed by all League staff, not only those individuals that are interacting directly with the student athletes.

Athlete: Those who are registered and participate in clay target events and competitions overseen by the League. Athletes include (or may be) minors.

Safe Sport Policy: As used here, a set of guidelines and policies regarding the League’s strategy for identifying, addressing, and eliminating instances of Misconduct.

Staff or League Staff: Any League employee, coach, assistant coach, or volunteer, including but not limited to Covered Individuals. “Staff” and “League Staff” are used interchangeably.

Covered Individuals: An adult authorized by the League to interact with an athlete in any team capacity or any competition or event overseen by the League.

Misconduct refers to conduct and behaviors identified by the Safe Sport Authorization Act and the Center for SafeSport as prevalent in amateur sports and particularly harmful, regardless of age. The six forms of Misconduct described below are considered Misconduct regardless of intent.

Bullying: (i) repeated and/or severe acts of committing or willfully tolerating physical and non-physical behaviors that cause, or have the reasonable potential to cause, fear, humiliation or physical harm in an attempt to socially exclude, diminish or isolate the targeted athlete(s); or (ii) any act or conduct described as bullying under federal or state law.

Hazing: (i) conduct that subjects an individual athlete or group to anything that may endanger, abuse, humiliate, degrade or intimidate the person as a condition of joining or being socially accepted by a group, team or organization; or (ii) any act or conduct described as hazing under federal or state law.

Harassment (including sexual harassment): (i) repeated and/or severe conduct that (a) causes fear, humiliation or annoyance, (b) offends or degrades, (c) creates a hostile environment or (d) reflects discriminatory bias in an attempt to establish dominance, superiority or power over an individual athlete or group based on gender, race, ethnicity, culture, religion, sexual orientation, gender expression or mental or physical disability; or (ii) any act or conduct described as harassment under federal or state law.

Emotional Misconduct: (i) repeated and/or severe non-contact behavior that causes emotional or psychological harm to an athlete. Non-contact behaviors include verbal acts, physical acts, and acts that deny attention or support; or (ii) any act or conduct described as emotional abuse or misconduct under federal or state law.

Physical Misconduct: (i) contact or non-contact that causes or reasonably threatens to cause physical harm to an athlete; or (ii) any act or conduct described as physical abuse or misconduct under federal or state law (e.g., child abuse, neglect, assault).

Sexual Misconduct: (i) contact and non-contact behaviors of a sexual nature; or (ii) any act or conduct described as sexual abuse or misconduct under federal or state law.

Note: An imbalance of power is always assumed between a coach, including an assistant coach, and an athlete.

Unrelated League Staff shall not be alone with a minor Athlete in a private setting or while they are participating in events for the team or those events or competitions overseen by the League. The League recognizes that individual meetings may be necessary in some circumstances to address an athlete’s concerns. In the event such circumstances occur, the meeting shall be conducted within view and/or earshot of another adult and presents a meaningful opportunity for interruption.

Interaction with athletes should not occur in any room where there is a reasonable expectation of privacy, such as a restroom or changing area, unless a second adult is present for any necessary interaction between an adult and an athlete in any such room. 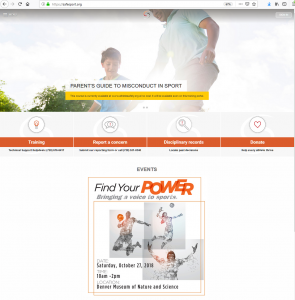 Misconduct awareness training provides Covered Individuals with information necessary to more effectively monitor their sport, minimize the opportunities for child physical or sexual abuse and other types of misconduct and respond to concerns.

The Center provides services to sport entities on abuse prevention techniques, policies and programs and provides a safe, professional and confidential place for individuals to report sexual abuse within the U.S. Olympic and Paralympic Movements. 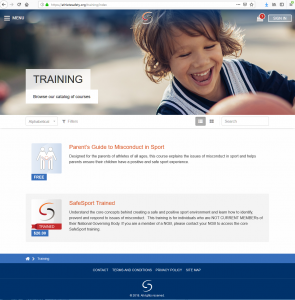 Designed for the parents of athletes of all ages, this course explains the issues of misconduct in sport and helps parents ensure their children have a positive and safe sport experience.
https://athletesafety.org/training/index

Understand the core concepts behind creating a safe and positive sport environment and learn how to identify, prevent and respond to issues of misconduct. 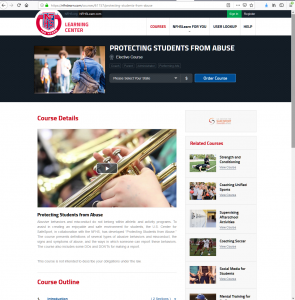 ‘Protecting Students From Abuse’ by NFHS

The course presents definitions of several types of abusive behaviors and misconduct, the signs and symptoms of abuse, and the ways in which someone can report these behaviors.

Covered Individuals are mandatory reporters. Every Covered Individual must report suspicions and/or allegations Misconduct, as defined in this Safe Sport Policy, the Center for SafeSport, and state and federal law. As a matter of policy, the League does not investigate suspicions or allegations of Misconduct or attempt to evaluate the credibility or validity of such allegations as a condition for reporting to the appropriate law enforcement authorities.

Reports may also be made through an online form available at http://www.usaclaytarget.com/safesportform/

Reports may be made anonymously. However, anonymous reporting may make it difficult to properly report Misconduct to law enforcement authorities. Additionally, if a Covered Individual reports anonymously, it may not be possible for the League to verify that mandatory reporting obligations have been satisfied.

Good Faith Reporting: Regardless of outcome, the League will support the complainant(s) and his or her right to express concerns in good faith. The League will not encourage, allow or tolerate attempts from any individual to retaliate, punish, allow or in any way harm any individual(s) who reports a concern in good faith. Such actions against a complainant will be considered a violation of our Safe Sport Policy and grounds for disciplinary action.

A report of Misconduct or policy violations that is malicious, frivolous or made in bad faith is prohibited. Such reports will be considered a violation of this Safe Sport Policy and grounds for disciplinary action, and depending on the nature of the allegation, grounds for civil or criminal proceedings.

To the extent requested and permitted by law, and as appropriate, the League will keep confidential the complainant’s name, the names of potential victims, and the name of the accused individual.

Suspicions or Allegations of Abuse: An independent investigation can harm the child and/or interfere with the legal investigative process. Accordingly, the League shall not attempt to evaluate the credibility or validity of allegations of child physical or sexual abuse as a condition for or prior to reporting to appropriate law enforcement authorities. As necessary, however, a person receiving a report may ask a few clarifying questions of the child or person making the report to adequately report the suspicion or allegation to law enforcement authorities.

Other Misconduct and Policy Violations: When a Misconduct allegation is not reportable under relevant state or federal law, the League shall internally address and investigate those alleged policy violations and Misconduct and impose discipline where appropriate.

Disciplinary Procedures: When an allegation of Misconduct is made against a League Staff member, the League may immediately suspend that individual and/or remove that individual from contact with any athletes until the allegation has been investigated by the League and law enforcement authorities.

The League recognizes that there are varying levels of Misconduct. Serious violations may result in immediate suspension or dismissal. In contrast, less serious Misconduct, depending on the circumstances, may be more appropriately dealt with through dialogue and a verbal warning. Appropriate action should always consider the necessity of protecting minors and other athletes from further abuse. In all cases, the League’s disciplinary procedures and actions shall be proportionate, reasonable, and applied fairly and equally.

A League Staff member’s failure to report suspicions or allegations of Misconduct to the League is a violation of this policy and grounds for disciplinary action, including possible termination, of the Staff member.

Notification: Following notice of a credible Misconduct allegation, the League may consider the circumstances in which it will notify other parents of athletes with whom the accused Covered Individual may have had contact. The League may notify its Staff, Covered Individuals, parents, and/or athletes of any allegation of Misconduct that: (i) law enforcement authorities are actively investigating; or (ii) the League is investigating internally. Advising others of an allegation may lead to additional reports of Misconduct.