A safe and popular sport that everyone can enjoy for a lifetime!

Trapshooting is one of the three major sports of competitive clay target shooting sports with a shotgun. The other primary shooting sports are skeet shooting and sporting clays. They are distinguished roughly as follows:

The layout of trapshooting field differs from that of a skeet field and/or a sporting clays course. There are variations of events within each shooting sport group.

Trapshooting is enjoyed throughout the world’s countries and has been a sport since the late 18th century when real birds were used. Birds were placed in traps which were then released. Artificial “birds” (clay targets) were introduced in the late 1800s.

Olympic trap was introduced to the Olympics in 1900. In the 2013 Summer Olympics, Kim Rhode became the first American ever to win Olympic medals in five consecutive Olympic Games in an individual sport.

All League events occur at a shooting range (often referred to as a “gun club”) that provides the proper trapshooting field that includes shooting stations and a trap house.

All student athletes are required to supply their own shotgun and must use factory ammunition. All types of smooth-bore shotguns, including semi-automatics, may be used provided their caliber does not exceed 12-gauge. Guns of smaller than 12 gauge may be used. About 80% of participants use 12-gauge shotguns. Most other athletes use a 20-gauge shotgun. Athletes are also required to wear proper eye and ear protection while on any part of the shooting range. Each athlete will also promote a positive image by wearing appropriate attire during all shooting events.

A practice or competition event will consist of shooting two 25 target rounds for a total of 50 targets from the 16-yard station. Up to 5 shooters (squad) will occupy the stations on a trap field. 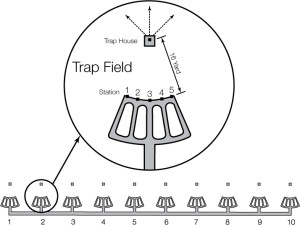 The trap field is the area of a shooting range where trapshooting occurs. Each field contains shooting stations (typically concrete walkways with yardage markers) and a trap house.

Each shooter will have all the equipment and ammunition necessary to complete the round each time they occupy a shooting station. All shotguns must be carried open and unloaded when moving to the athlete’s assigned starting station. Test firing of a shotgun is not permitted.

At the moment the shooter calls and until the target appears, the shooter must stand in the “READY” position including:

Upon a “START” command from the scorekeeper, each shooter, in turn, will:

A shooter may close the action on the gun only after the previous shooter has completed his/her turn. No shooter will turn from the shooting station before the shooter’s gun is open and empty. Each shooter should begin his/her turn within a few seconds after the last shooter has fired at a target and the result has been recorded. At the end of each round, the scorekeeper announces the scores for that round in firing order.

Moving From Station To Station

After the first 5 shots are completed by the entire squad, each shooter will move to a new station by:

Completion Of The Round

Upon the completion of a round, the scorekeeper will declare “OUT”. Shooters will be notified of their scores, make their shotguns safe, and carry the gun in the approved manner and exit the station.

After the event is completed, the coach submits all athlete scores to the League. On Saturday at 9 p.m., all scores are calculated and published on the website.